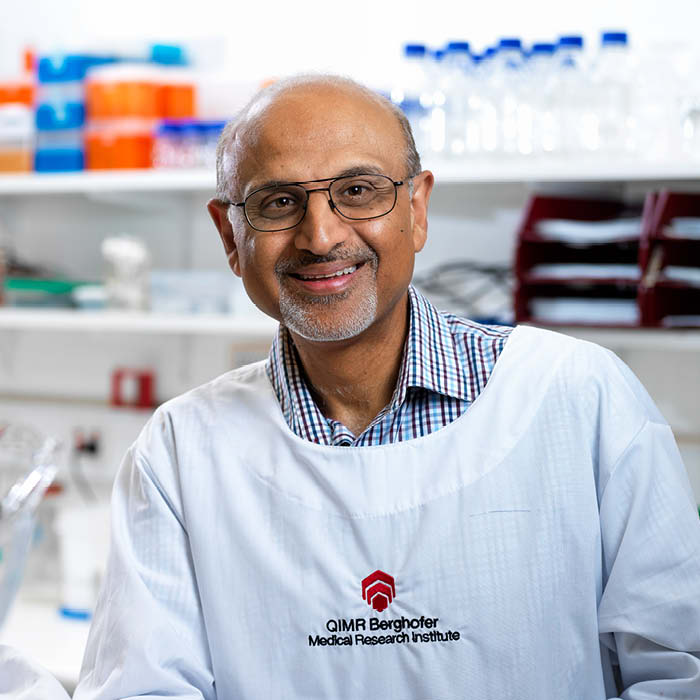 Professor Rajiv Khanna obtained his doctorate degree from India and undertook his post-doctoral training at the Queensland Institute of Medical Research (QIMR). He is the Coordinator of QIMR Berghofer Centre for Immunotherapy and Vaccine Development. He holds Senior Principal Research Fellowship from the National Health and Medical Research Council of Australia and was also appointed as Honorary Professor at the University of Queensland and Griffith University, Brisbane. Professor Khanna is a Fellow of Australian Academy of Health and Medical Sciences.

2012-current: Coordinator of the Centre for Immunotherapy and Vaccine Development, QIMR Berghofer

The primary focus of my research group has been human immune regulation. The major goals of our laboratory are to obtain a deeper understanding of the mechanisms by which the human immune response to viral infections and human cancers may be generated, augmented and applied to the treatment of these diseases.

We have used Epstein-Barr virus-associated diseases as a model to understand how cellular immune response in humans responds to persistent viral infections. Over the last 15 years, we have successfully translated our laboratory research towards the development of novel immunotherapeutic strategies for the treatment of virus-associated cancers.