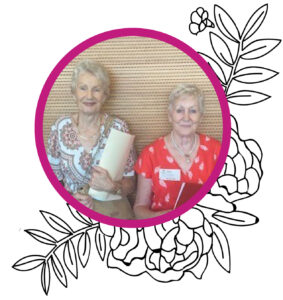 In 2021, we mourned the passing of several supporters of our Institute. Here we remember one very special supporter for her distinctive life and contributions to medical research.

Mrs Pamela Gaye Webb (pictured left with her sister, Barbara) was born in Tasmania. Her passion when she was young was horse-riding and with her father’s encouragement she became a very skilled horse-woman in dressage.

She later married and had a daughter and two sons. They lived in northern Tasmania on a small property on which they bred horses and they attended show competitions around the state. Following her later divorce, Pam and her children moved to Albury then later to the Gold Coast where her sister was living and her parents visited often.
Pam became interested in what her mother and sister were supporting, the medical research at QIMR. Visitors from QIMR were always welcomed by her mother with freshly baked cakes (so they called by quite often).

Pam continued to generously support the work being done at QIMR Berghofer with a special interest in researching the treatment (and possible cure) of Huntington’s disease as it had touched her own family. She was also an active and enthusiastic member of their support group down on the Gold Coast with many of them bereft when told she had passed away.

Pam and her sister Barbara McKay are both recipients of the Clive Berghofer Humanitarian Award with Pamela the latest recipient of the award last December. Pam (and Barbara) donated to QIMR Berghofer for more than 25 (consecutive) years.
We will miss her tremendously but will remember her for her wonderful legacy. 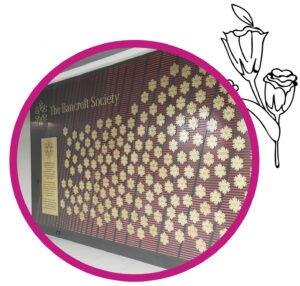 At QIMR Berghofer, gifts in Will play a crucial role in funding vital medical research that saves lives and creates a healthier future for all. These gifts enable us to progress clinical trials, support our researchers across more than 60 labs, provide training and education for our best and brightest research students through PhD scholarships, and launch new projects to create a healthier future for all.

We believe it is important to honour and celebrate these exceptional gifts and acts of compassion, which is why we have commissioned the new Bancroft Society benefactors’ wall. Now a permanent fixture in our central building, the Bancroft Society wall is a tribute to the generosity of the many people who have a left a gift in their Will to QIMR Berghofer – people who shared our vision and wanted to make a positive difference.

We express our sincere gratitude to those extraordinary and big-hearted members of our Bancroft Society, who have already made the ultimate gift by including a gift in their Will to QIMR Berghofer. The impact you will have will be truly inspiring. Your compassion and generosity will continue to change – and save – lives for generations to come.

For more information on how you can change the future of health by supporting medical research in your Will, contact our Gifts in Wills team for a friendly and confidential chat on 1800 993 000 or email giftsinwills@qimrberghofer.edu.au 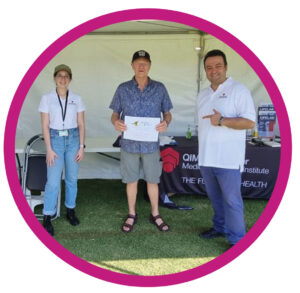 We were proud to be chosen as the beneficiary of the 41st All British Car Day community event run by the MG Club of Queensland. Featuring over 690 British classic cars and motorbikes, the day was a huge hit with supporters from far and wide. Our scientists displayed their microscopes and showed enthusiasts how their donations impacted medical research and how vital such support is.

With face painting, a raffle and giveaways the QIMR Berghofer marquee was a hive of activity throughout the day. Special thanks to O’Reilly’s Rainforest Retreat for their generous donation of a two night stay for up to four people in a two bedroom villa for our raffle.

The lucky winner, Martyn Knight was bowled over by the win as it holds a special place in his heart, as that is where his mother’s ashes were scattered.

Many thanks to the MG Car club of Queensland, local support and scientists who all took part in the event making the day a roaring success.